The Met Police have just had two of the worst months for reported bicycle thefts in the last 10 years. A huge spike was seen in August and September. 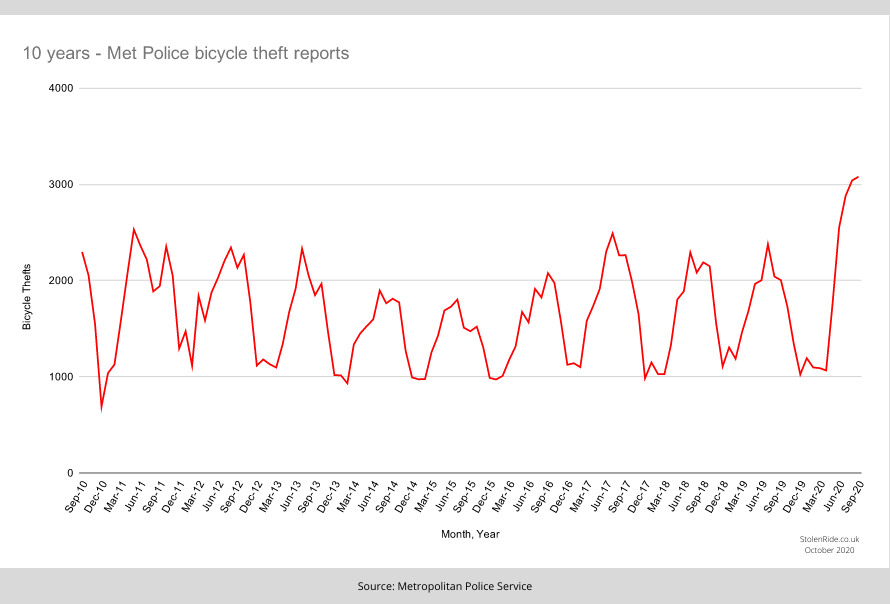 What are the peak months for reported bicycle thefts over the last 10 years? The table below (covering only Met Police data) shows the 10 highest months (between September 2010 – 2020):

September data is yet to be released from the City of London police, but August saw a 19.64% increase compared to August 2019.

Bicycle theft is breaking the norm, with other crimes still down from the levels seen before the pandemic. Taking theft from a motor vehicle, as an example, September saw an 18.09% decrease compared to September 2019 – Met data.

As mentioned in our July blog post, we will have to wait until later in the year to see the full picture and to run a true analysis. Historically, bicycle thefts drop significantly after October as the weather gets colder, before rising again in Spring. Certainly what we’re seeing at present is concerning, in a time that we all have many other pandemic related concerns…

It’s not just London seeing a surge in bike thefts. Paris has seen a 62% rise and New York a 27% rise.