Enthusiastic consumers of cycling gear this year had the chance to see 2020 products just days after trade members at the Eurobike Show in Friedrichshafen. Stolen Ride was among those walking the numerous Zeppelin halls in search of the best in bike security.

Here’s what we discovered…

Crime data shows that theft from outbuildings and the home tops the pile, so it’s welcome news that Hiplok has bolstered its offering at the Gold Sold Secure level.

Set to come to bike shops in 2020 is the ANKR, a maximum security unit for installation on the ground and on the wall. Following on from the styled Airlok, the ANKR is a touch more minimalist, but no easier to attack. Able to be used in conjunction with chains and D-locks, the ANKR’s chassis is made from premium hardened steel, paired with a rotating inner to make feeding a secondary lock through a breeze. An integrated rubber cap prevents paint scratches should your bike rest against it.

Interestingly, the ANKR differs from many other ground anchors in that it does not feature permanent bolts meaning it can be moved and re-used at a later date.

Ben at Hiplok told us:
”We wanted to bring our unique Hiplok problem solving design approach to bike storage. Alongside our wearable bike locks and Z LOK security ties, we can now offer quality, practical secure storage products to help protect bikes at home, in the garage or at work.” 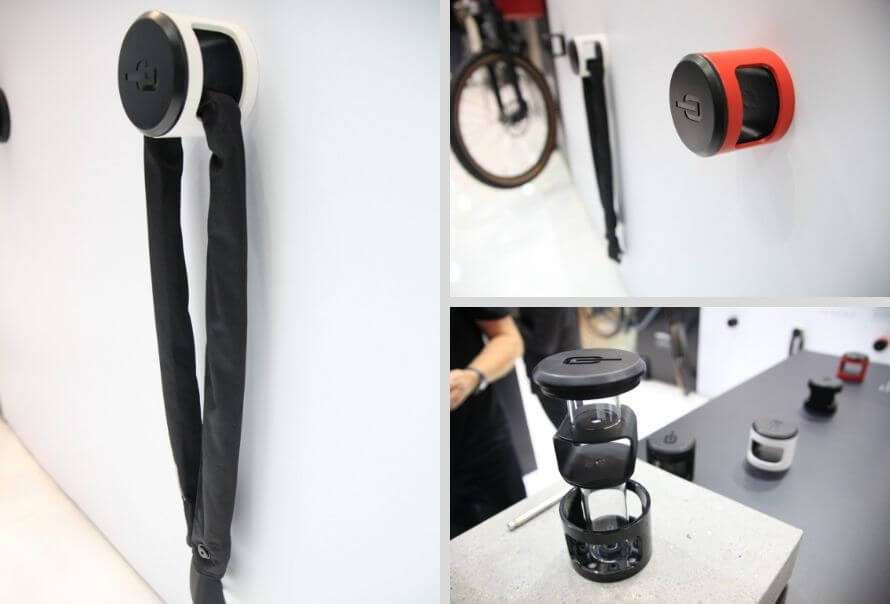 One of our favourite innovations of the entire show, let alone in the security space, is Hexlox’s new answer to thru-axle compatibility. There are three iterations of essentially the same two-part system, meaning that all you’ll have to do is rock up at your friendly local bike shop and have them check the thread and pitch of your particular bike’s system.

As with other Hexlox lines, the name of the game is to keep your wheels on your bike and so they supplied key will be the only way to remove your axles thereafter.

The best bit, the system is an upgrade to many products on the market, much thanks to the speccing of a steel axle head. Replacing up to 50 different thru-axle systems on the market there’s little chance Hexlox can’t keep your wheels secured. A special kit has also been developed for those running Suntour’s Q-Lok clad forks. To secure both wheels look out for the box badged ‘Anti-Theft Kit’.

Thru-axles aside, the standard Hexlox now comes in black for those wanting to fine tune their colour compatibility. 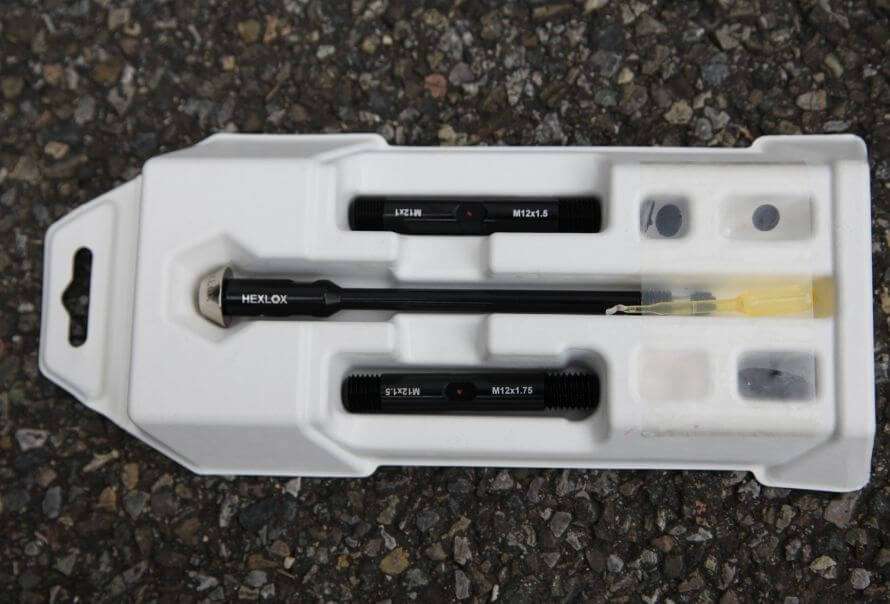 If you’re in the market for a new top tier security product to defend your pride and joy at home or at work then Kryptonite has given its New York Legend a revamp.

As the name suggests, this is built to be as tough as they come for as rough as they come. Rated 10/10 by Kryptonite’s own guide standards and Gold Sold Secure by the industry’s go to independent test laboratory, the 150cm chain is largely made up of Nylon web wrapped 14.4mm links made from hardened steel. At the shackle the linkage is beefed up a further 2mm to reach a noticeable chunky 16.5mm.

As with other Kryptonite lines, the New York Legend is covered with a lifetime warranty and the company’s Anti-Theft Programme; an insurance policy that will pay out up to £3,000 if this particular lock is broken into. 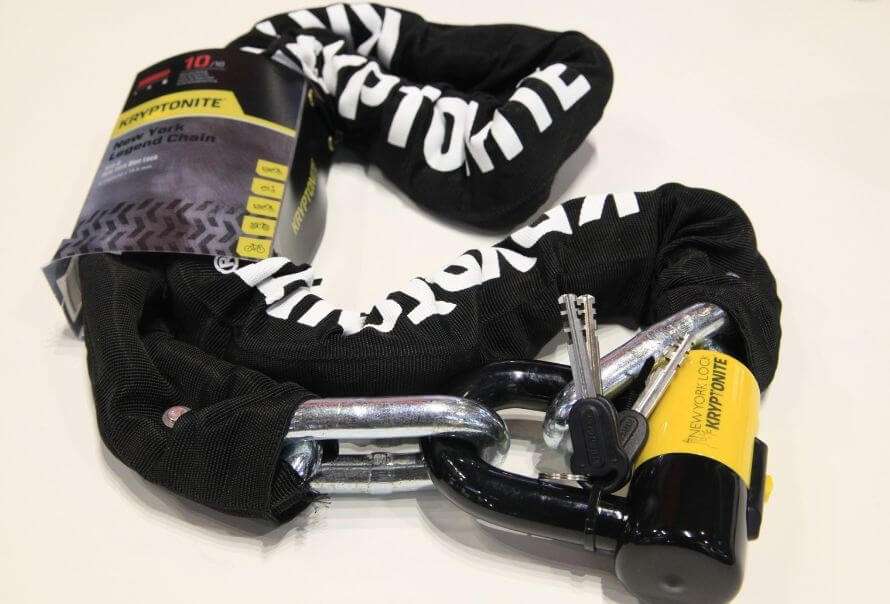 Likely to retail at just shy of £70 when it lands in the UK, Abus has transferred some of the technology from its Bordo Alarm lock into a new package to sit anywhere on your bike.

In what is immediately obvious to be an audio device, the Alarm box attaches either via screws or a metallic band designed to encircle a frame. So, what does it do? Well, it emits a 100-decibel sound if you rattle its cage. Of course it needs to detect sustained movement to fully go off, meaning gentle scrapes will only see a pre-alarm sound, enough to let the would-be thief know it may not be wise to proceed. Abus say that this is the first of more alarmed lines to come.

On the aforementioned Bordo series it’s also worth looking out for the new UGrip Bordo 5700, a fast use lock that’s designed for anyone skipping quickly between transport modes. As with others in the Bordo series, eight foldable steel bars rotate in and out to form a 100cm lock that’s able to be stashed on a bike-mounted bracket. 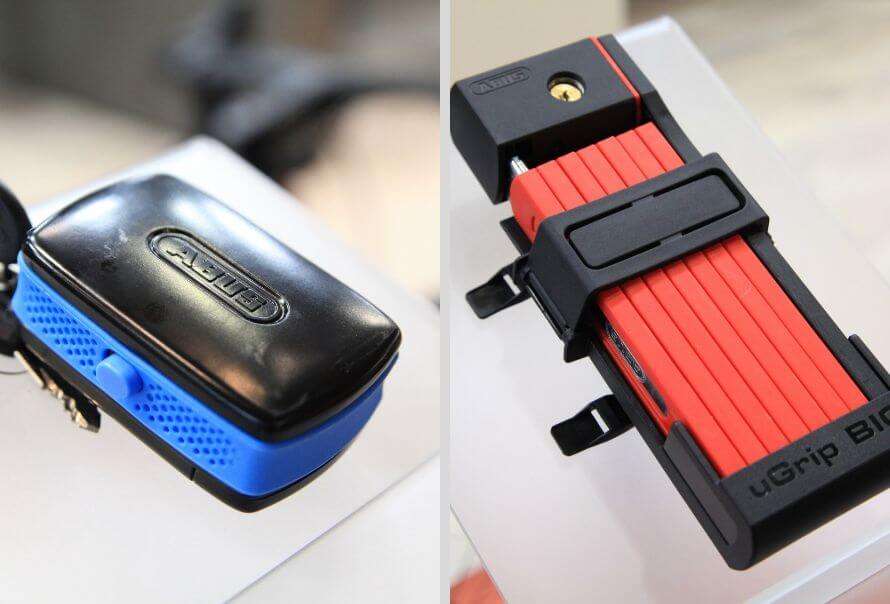 Stumbled upon by accident and outside of the towering halls was the Yerka Bike, a new take on integrating security into a bicycle frame; in fact the lock is the frame.

With a little research you’ll find a bold claim: “We haven’t registered any case of theft where our technology has been used,” says the brand. Now that could be down to the volume currently in the market, or it could be that thieves are simply standing back and admiring what is a quirky, yet effective, bit of design.

Those keen to try to break Yerka’s system would soon realise that by doing so they will render the bike unrideable and thus value-less. We wouldn’t put it past some thieves to not think that through, of course. Said to transform in 15 seconds, the Yerka bike frame decouples at the downtube to wrap in a rectangle around the bike rack or, as we saw, lamppost. Within the tubing you’ll find a key-activated 17cm by 25cm lock. The frame has two arms that open and cross the bike, while the removed seat tube completes the linkage to form a lock.

Keen on the idea of having built-in security? Yerka offers a 30-day test drive and two-year warranty on its bikes, which are found at yerkabikes.com 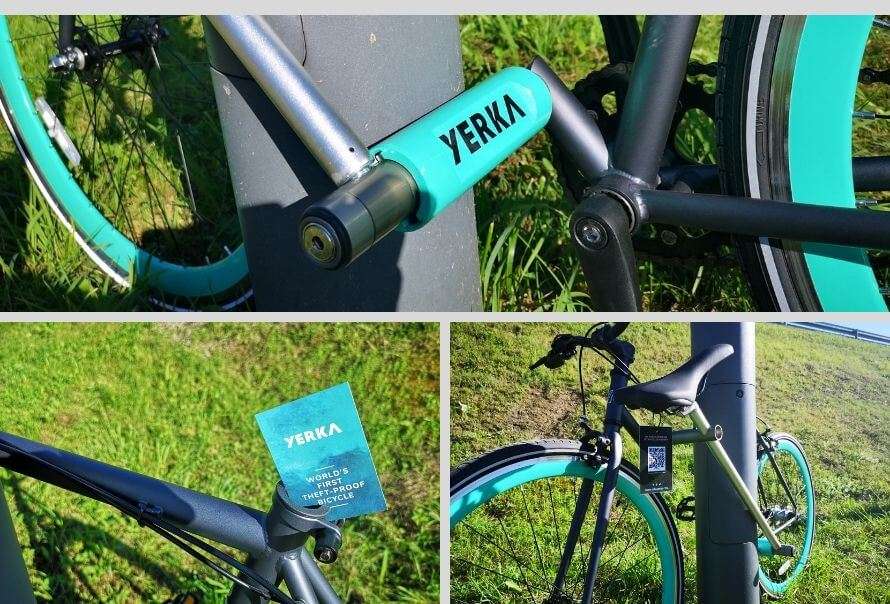