In our experience, Twitter is a unique and powerful social network that has huge potential for ‘social good’, through quick and open news and knowledge circulation.

At Stolen Ride, we use Twitter as a community hub for recovering London’s stolen bikes. Users tweet their stolen bike details to the @StolenRide account, then the community retweets and everyone actively searches for the bike. When there is a sighting, the two parties very simply connect through Twitter. Many bikes have been recovered by the community, with users spotting the stolen bikes for sale in local London markets, online and even as far away as Spain and Moldova. The quickest recovery was within one hour. The tweet went out and a fellow cyclist spotted the bike parked outside a local London café, the owner was updated via Twitter and the police then assisted the recovery.

When and how was your bike stolen?

It was locked up on a lamp post outside Bill’s restaurant in Hammersmith on the busy main street off the Broadway next to the underground station.

As I was only at the table by the window and my mini d-lock wasn’t big enough to get round the bike frame and the lamp post, I just tied a cable to the post and the bike, then the d-lock from the cable to the frame. The thief scoped my bike for 10 mins then cable cut it and cycled away (all caught on CCTV)

How did you feel when your bike was stolen, what does your bike mean to you?

I wish I could say that I’d had loads of long treks on this bike but sadly I had just bought it, it was barely two weeks old. I commute 20 miles return trip every day to work, and my wife had been telling me I ought to treat myself to a nice bike, one that I could commute with but also use for a trek I had been planning with my friends in the USA. So after some convincing I splashed out on the Surly LHT, the daddy of long haul touring bikes. So in essence though brand new, the bike meant an awful lot to me. It was my first geared bike having ridden many ‘beater’ single speeds in the past.

What steps did you take after your bike was stolen?

Well, firstly my wife jumped on twitter and found ‘@StolenRide’, she posted there. 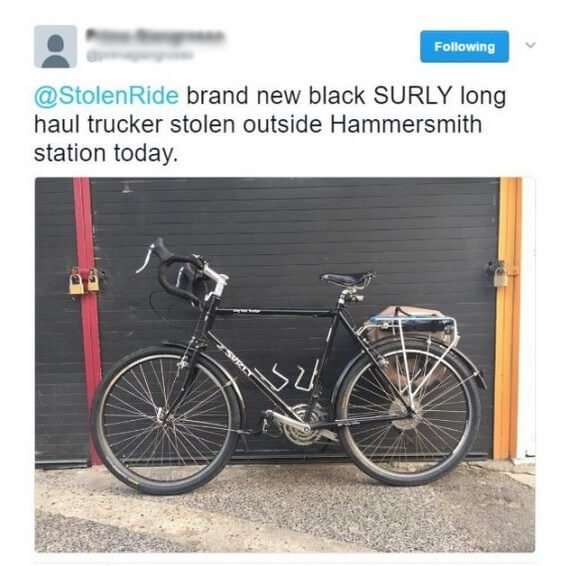 I hadn’t actually registered (or insured!) the bike, so I went onto the bikeregister.com, and it was then that I saw someone had registered my frame number already. I had called the police on 101 immediately after to get a crime reference number. So I contacted BikeRegister and reported the bike as stolen and also asked if they would be willing to release the information onto the person who had attempted to register my frame number. I even went to Brick Lane a few times and wandered around for hours trying to see if someone was selling my bike on the street.

How was your bike recovered?

First of all there was the tip off from the BikeRegister, meaning someone had obviously attempted to register the bike as theirs. Next, my wife gets a tweet from a user who saw her post on @StolenRide.

He said he saw a bike for sale on eBay and thought it sounded like mine; the seller used a stock image for the sale but on request had sent images by DM to the twitter user. So my brother and I both took to eBay and started having conversations with the seller about price, where the item was located etc. They didn’t give much up but did agree to a meet.

I contacted the police, after being pushed around the local station I had reported the crime to, the Cycle Task Force and the local neighbourhood team where the bike was being stolen, all units told me it would take weeks to get info from eBay on the seller, or to arrange a police led ‘attempted buy’.

Initially I was gutted but really wanted to see the bike back. I arranged a meet that evening and coaxed a friend into coming along for safety. The police had warned me against meeting a buyer and said, I was to at least inform 101 when I had a location, so that if urgent help was needed they had the details. Finally the seller, after sending me to two different tube stations and down a few dodgy alleys, gave an approximate location. Then I called 101 and surprisingly they sent an undercover neighbourhood team down to follow us.

We got to the meet spot and were taken inside a flat where I saw my bike. I asked to have a test ride and rode it up the street to a 12 seater police wagon which had just rolled up. The police wagon and undercover car all followed me back to the flat where they questioned the seller and returned my bike to me.

Unfortunately the seller claimed to have purchased the bike from Brick Lane Market so there’s little hope of a prosecution, and the journey had cost me a Brooks saddle, a rear rack and some gears adjustments, but in the end I got to ride home on my Surly.

What tips can you give to others who have also been a victim of bicycle theft?

Try everything. As many eyes out there looking for stolen bikes the better. The police don’t put a lot of resources into stolen bikes, so don’t expect a great turn out from them, but the more bikes reported, the more they crack down on crime.

Oliver, the hero who located the stolen bike shared his side of the story:

I had been looking for a bike for a while, and saw one pop up on eBay, which you could tell from the outset did not seem legit. The photo used was just a stock image (they only later sent me some grainy photos after I made contact), and they had no knowledge of the bike whatsoever. As soon as they said that they did not know the size, and that it had suspension, I could tell it was stolen. I typed ‘surly stolen bike London’, and came across the Stolen Ride twitter feed – the photo used matched exactly, so I sent the link.

In terms of advice to others locating stolen bikes, or if someone sees something that looks a little suspicious, just try your luck and Google it to see if it matches any notices. I nearly ignored it, as I didn’t think the police would pay any attention – just a couple of minutes of my time, however, reunited an owner with their bike.